You are here: Home / Blog / Hemp History / How The Ancient Chinese Used Hemp – A Historical Look

When it comes to the history of hemp, it’s origins point to China as the place where it was first used extensively and thoroughly understood for a wide variety of uses. Hemp has been found in China dating back 12,000 years according to some sources suggesting that it was the first crop cultivated by humans. Hemp then spread from China into Malaysia and all around the rest of Asia before cutting routes through Russia and Africa into the Middle East and Europe.

China Depended heavily upon hemp in its ancient passed from keeping the country safe, to feeding and clothing it’s people.

In this article we will take a quick glimpse into how the ancient Chinese used hemp to their advantage. 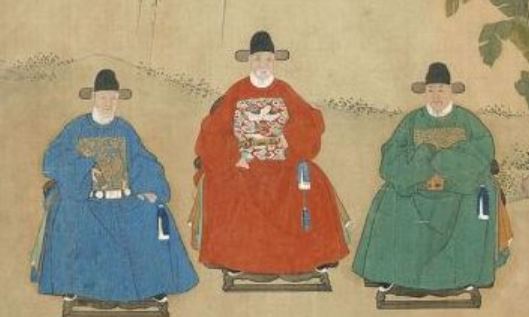 The people of ancient used hemp to make clothing, especially the poor, while the rich wore silk.

Hemp would continue to be the number 1 source of clothing material until about 1,200 AD, when it was replaced by the cheaper and softer cotton.

The hemp used for the clothing was the stalks while the rest of the plant went to other uses.

Clothing symbolized status and emotion in ancient China. There were a lot of social factors prescribing who could wear what.

Only the emperor could wear yellow for example and in the Sui dynasty, the poor could only wear Blue or Black.

The Ancient Chinese clothing was referred to as Han Chinese Clothing.

The outfit was called the Han fu and it was slightly modified for men and women. It was loosely cut.

The higher the class in society, the better the clothing they wore.

There were three main garment types:

the Shenyi: Trouser and top sown together to make one garment.

The Book of Odes or Shih Ching describes the Chinese use of Hemp for Fibre and Seed during the 11th to 6th Centuries BC in modern day Beijing.

The Ancient Chinese ate Hemp Seeds and this process would go on through to the 10th century when better grains became available.

The old book of songs says the following: “The Farmers eat hemp seeds in September”

Hemp is part of the Li Qi which is a group of grains making up the balance of the Chinese food sources including:

Hemp seed has been found in many Ancient Chinese burial sites that indicate its use as a food:

When it comes to food, it is clear that the Ancient Chinese had a clear understanding of male and female Hemp and the differences between them.

The Er Ya, written over 2000 years ago mentions:

“Ju ma (Female Hemp) grows tall and straight. Its fibre is very thick and strong, and its seed can be eaten. The fibre of xi ma (Male Plant) is thin and soft, and can be used to spin cloth.”.

The ancient Chinese even recorded how Sparrows would eat the freshly germinated hemp seeds that had been planted in the ground.

It is clear from looking at history that China were far ahead of their time when it came to hemp cultivation and use.

We know cannabis, named ma or da ma, was used for its fibers and food from very early in Chinese history, we can also conclude that they knew of its medicinal benefits very early as well. 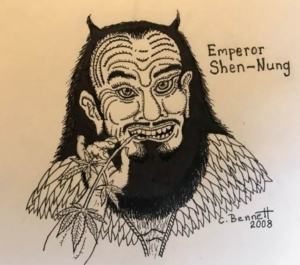 The Chinese were also aware of the difference between the male and female plants and how the female plants could produce a psychoactive reaction.

The earliest known Pharmacopeia in existence is likely to have belonged to Emperor Shen Nung (2,700 BC).

The book shows how hemp growth was plentiful and it shows that they were aware if its psychoactive properties.

Ma-Pho a word contained in the book refers to a change in state while ma-fen, also included, refers to psychotic properties of the resinous tract.

Sheng Nung himself is said to be the father of Chinese history often experimenting with various plants to see their effects even to the point of poisoning himself so he could find an antidote.

Hua T’o was an ancient Chinese surgeon who used a Hempen wine (Ma Yo) as an anaesthetic to ensure his patients would feel less pain.

It is said that he would perform painful operations while his patients were under the anaesthetic including organ drafts as well as operations involving the chest, limbs, loin and even the intestines. 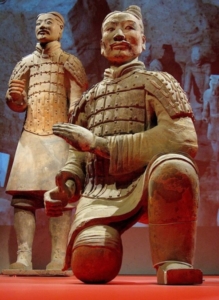 Last but not least is the ancient Chinese use of hemp for warfare. We know that the art of war came from Ancient China and

that the Chinese were skilled soldiers when it came to hand to hand combat and ancient warfare.

What many don’t know is how prevalent the use of Hemp was in ancient Chinese warfare.

The Ancient Chinese used hemp string in their bows which was stronger than the bamboo string it replaced. Hemp bows shot further

Hemp was also used in the armour where hemp cord was used to keep the armour together.

Hemp helmets, buckles and boots were used, doused in vinegar to make it harder.

It has also been noted that ancient Chinese warlords would grow hemp outside their castles especially for their war efforts. 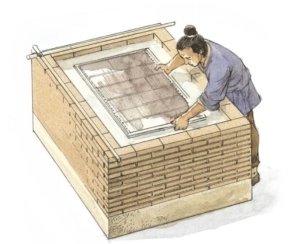 Hemp was the primary source of paper in Ancient China from about 100 AD. Hemp paper had been found in a Western Han Dynasty Tomb

The result was paper sheets that could be written on. Paper was also unique to China in those ancient days and Japan didn’t create paper until the 5 century BC

and then the Arabs created paper in the 9th Century AD.

to form together and bond as paper in a cheaper way.

The race to create the highest quality paper was intense and all sorts of material would be tried.

Rattan became the material of choice and replaced Hemp with Bamboo eventually being preferred.

When it comes to hemps fibrous uses, it is clear that the Ancient Chinese had a clear understanding of Hemp sexuality and the differences between them.

The Er Ya, written over 2000 years ago mentions:

“Ju ma (Female Hemp) grows tall and straight. Its fibre is very thick and strong, and its seed can be eaten. The fibre of xi ma (Male Plant) is thin and soft and can be used to spin cloth.”.

The ancient Chinese even recorded how Sparrows would eat the freshly germinated hemp seeds that had been planted in the ground.

The book, The Essential Arts for People or Qi Min Yao Shu which is over 1400 years old describes how the male plant will pollinate the female plant if not pulled up and when it is pollinating, the fibres are the strongest.

The Ancient Chinese were expert Hemp growers, describing advanced techniques for fertilization and growing in the 2nd century BC:

“Deep plow and fertilize the soil before sowing the seed. When spring comes, about February to March, select the dusk of 4 rainy day to sow seeds. Remove the hemp’s big leaves when it is growing.

Water the hemp frequently, and if there is much rain, the quantity of water should be decreased. The water from wells should be used where there is no river near the field, and it should be warmed by the sun before using. By using all of these controls, the yield of dry stalks and leaves from each mu* could be 50-100 shi* and the lowest yield could be 30 shi*.

The reports as Hemp grown for fibre are scattered through ancient Chinese literature from 2000 BC onwards.

Hemp Pottery fragments, textiles and cloths have been found in many archaeological sites in Ancient China and it was also used in burials.

The hemp cloth was used as an outer shroud to protect the silk clothing worn underneath and this was attached with a hemp rope, as witnessed in the Western Han Dynasty tombs in the Gansu province in 200 BC.

Along Ancient China’s silk road trade route many Hemp clothing items have been recovered including hemp shoes which show the ancient Chinese knowledge and expertise of Hemp cultivation.

The Chinese were the first humans that we know of, who cultivated hemp. We can see that had a deep understanding of hemp from a very early period and were using it for medicine, food and clothing since time began.

Hemp would go on to play a crucial role in the forming of the modern world with early America heavily dependent on hemp as well as Britain and Europe.

Hemp looks steadily on the rise again and it will come as no surprise that China are the world’s leading grower of Hemp. With the farm bill now passed in America and a whole host of other countries look at the benefits of hemp legalization, China may have some competition in the coming decades.